Roundtable Lunch: What's Up With Satellites?

Telecom Council meets monthly for lunch with dozens of telcos, vendors, startups and VCs. This month we will meet over lunch to learn more about the changes in the LEO satellite space.

Agenda, Attendee List and Presentations are available to members in the PRESENTATION LIBRARY plus a VIDEO RECAP from the demo companies

Silicon Valley, California, Mar 24, 2016/Meeting Recap/  The March Telecom Council Roundtable lunch was all set to talk about Low Earth Orbit satellites, or LEOs. LEOs are resurgent these days and we wanted to know why. These satellites are cheaper to launch than geostationary ones, because they go to lower altitudes, however, they need to fly laterally at much higher speeds to remain in these lower orbits, so cannot stay over one position over the earth. But, while GEOs stay put, they are 26,200 miles away from the equator, and thus introduce about 500 milliseconds of latency for the round trip. LEOs can deliver about 10ms propagation roundtrip delays from their lower ~700 mile altitudes. On the downside, a single GEO can serve a region day and night, but it requires a constellation of LEOS buzzing overhead to assure that at least one will always be in place. Thus, a LEO solution is usually a global offering from day 1, where a geo serves one market, meridian by meridian. 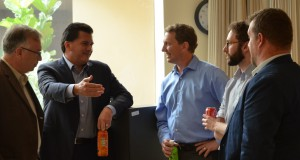 LEOS, thus, are well-suited for two-way communications, low-latency applications in hard-to-reach areas, communication fail-over redundancy, and any kind of ground-surveillance application such as imagery, scientific sensors. With their lower altitudes, received signal strengths can be higher, building penetration better, and the size of the ground station can be reduced.

With that set, we expected a discussion of how LEOs would soon replace dated GEO systems, but what we got was the revelation that both kinds of satellites are in growth mode — and this despite constantly improving terrestrial network footprint. Unlike business plans of the 90s such as Globalstar and Iridium, today’s satellite plans are being capitalized with the understanding that cellular will take the lion’s share of the communications business, yet will still leave enough meat on the bone to profitably offer blanket global coverage from space.

Satellite technology continues to progress, providing greater bandwidth, and lower perceived latencies. While the speed of light isn’t changing, LEOs offer shorter latencies, and ground stations use caching and TCP Acceleration (faked ACKs) to reduce signaling delays. Satellites are using modern modulation schemes, and highly directional transponders to get additional spatial spectrum re-use. A modern GEO broadband service can offer 25/3 Mbps service for $110/mo with no cap, but with just the first 30GB prioritized and best effort after that.

LEOs and GEOs can serve the telecom community in a variety of ways:

– as gap filler networks for backhaul
– for customers roaming out of terrestrial networks
– for more accurate timing signals than GPS can provide, with better security. Useful for high QAM modulation.
– for broadcasts, such as mobile media, or converged media (like DirectTV and AT&T)
– to quickly comply with regulatory coverage requirements
– for IoT tracking of high-value assets
– IoT connection and backhauling
– global services, service continuity

While terrestrial networks will always have the latency and speed advantages, space-based networks will continue to have a coverage advantage, and there is a market for both.

Agenda, Attendee List and Presentations are available to members in the PRESENTATION LIBRARY plus a VIDEO RECAP from the demo companies