Telecom Council meets monthly for lunch with dozens of telcos, vendors, startups and VCs. This month we will meet over lunch to review Blockchain technology, and its uses in communication.

Silicon Valley, California, Aug 26 2021/Meeting Recap/  Blockchain is a hot technology coming out of the Fintech sector, but is increasingly interesting for telcos. Telcos are curious about how they could play a role as a service provider in Blockchain, but also how they could use it for security. Our Roundtable panel discussed what Blockchain is, and how it could apply to telecom. 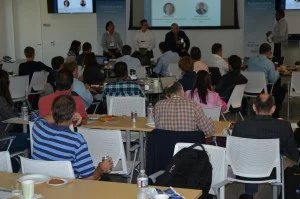 Panel moderator Shriram Natarajan, CTO at Persistent, started out by explaining that Blockchain is not the same as Bitcoin, although the two emerged together. Bitcoin is a new currency, and blockchain is the secured public ledger system that tracks who holds how much Bitcoin. Therefore, blockchain could equally be used as a secure public ledger in any application.  There is no limit to the number of blockchains. They can be purpose-specific, public, or private.

Abraham Kang, Director of the MPS Lab at Samsung, further explained how Blockchain works, as a distributed ledger where all transactions are stored in distributed copies. Every transaction is time-stamped and  appended to the blockchain is done as a block that is linked to the previous block. The distributed copies are held by various node stakeholders, miners, and volunteers. All nodes should reflect the same “chain” of transactions, and in the case of any discrepancies, the majority consensus is considered accurate.

Our discussion found a few ways blockchain could apply to telecom, but also limitations that would reduce its usefulness.

It was a great discussion, with a lot of questions and comments from the audience as well as our panel. Thanks to our panelists and guests.