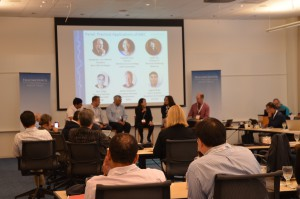 Star topologies make sense, but can become bogged down as billions of devices connect and start to send chatty signaling data or payloads. The Internet has shown that replacing a star topology with a “star of stars” topology can better handle a surge of connected endpoints by keeping lots of traffic inside segments and LANs.  MEC helps telecom networks achieve similar efficiencies.

MEC or Distributed Cloud has the ability to move compute power to the edge in telecom networks (much as it has in IT and data networks) in order to reside in unusual locations like:

Moderator, Jon Metzler, President at Blue Field Strategies explored these and other considerations with our panelists:

Distributed Cloud reduces latency and traffic through the core for information that actually remains mostly local.  It allows the WWAN to compete more effectively with WLAN and other solutions.

NFV and SDN are powerful enablers of Distributed Cloud, since dedicated hardware will not need to be placed at the network edge in order to run edge servers. Virtual machines can be spun up and down as needed, and managed by a SDN. Distributed Cloud may start with some targeted services, but eventually even instantiations of the EPC (Evolved Packet Core) can be run at the edge, improving network resiliency, speed, and efficiency.

Networking standards have been around for three decades and were primarily driven by telecom Use Cases where faulty system failures would be too catastrophic to contemplate.

White boxes are built with off-the-shelf switching chips known as merchant silicon (from Broadcom and Intel), and loaded with open SDN software to run many networking applications.

Having Linux as the network OS changes the networking landscape, as new applications running on the Linux-enabled switch do not need an IETF standard to talk between each other, just like any application running on Linux on servers within the data center. That opens up the door for startups and non-traditional NEPs (like Dell or Lenovo, for example) to provide networking applications and solutions into the telecom market.

This can be a bit unsettling for traditional Network Equipment Providers (NEPs).

This is tantamount to a whole new world order for networking.